Share your ideas and thoughts for the game with the community and team.
Post Reply
7 posts • Page 1 of 1

I was curious what folk might want to see (or not see) for the character you play's movement within the game. Things to consider can be stuff like:

Stuff like that. Do you like characters to be very animated and expressive when they walk? Lots of use with arms while thinking/talking?

What made this catch my attention was contemplating if the game would actually make use of 3 general types of movement. In other threads we discussed if it would be kool to have stealth or sly ways to avoid combat or navigate an area as part of the action/pezzle elements. Then I got ot thinking of the 3 possible walk cycles.

Normal: a casual slower pace used when exploring an area on the rear hindquarters as is seen in parts of the original demo. Posture is fairly centered, leaning neither forward nor backwards, hands free to hold lanterns, weapons or a shield .

Running: Still mostly on bipedal but you beginingg to see the posture lean forward like a distance runner, possibly sheathing a weapon or shield to make use of one front paw to grasp at the ground or rocks when running up inclines

Sprint: engaging this is pure flight response. Weapons or shields/accessories are put away and the character moves at top speed on all fours, vaulting across the terrain terrified or determined to get somewhere (or get away).

If a type of stamina gage is implemented you could have "running" and "sprinting" drain it faster than a normal walk. Brief moments spent hiding under objects or in shadows quickly replenshes stamina, but going from a lengthy run or sprint to a normal walk restores it at about 1/2 as quick.

I am sure Seith had a lot of the animations already plotted and even fleshed out animatics for characters. But if anyone has a particular idea or favorite animations they'd like it could be fun to toss em out here.

as you know, Seith really is a wizard animator, and the Unity game engine is well set up for animation, so GoaT really could be something quite special in this regard.

I think your description of animation, and especially of the walk/run cycles, is close to Seith's vision. Like you, I'd bet that movement speed, balanced with weapon availability and stamina, will be factors that skilled GoaT players will consider. Also, there is likely to be some kind of slow and crouched walk, like sneaking, as part of the game's stealth.

Running, jumping, dodging, agility and stealth are interesting... seeing as these are how 'real' mice escape their predators. I'm super keen to find out how Seith will approach these, because imho these are close to the heart of GoaT's gameplay. Its funny, because I just spent 45 minutes chasing my own chinchilla* who escaped a couple of days ago. She's clever, quite fearless, quick and very agile (even wall jumping). When she gives up (usually, when cornered) she'll growl fiercely, stand up tall on her hind legs, and urinate on me like a fire hose as I move in to collar her! Normally, she's so cute and friendly, loves to be scratched, but thoroughly detests being picked up. I don't think Seith will include projectile urination as an emote though

So far on the main video, in terms of idle animations and emotes, we've seen the mouse (so darn cute) scratch his butt and examine his tail. For sure, Seith will be adding more, and the mouse will play that lute

*@EvilKing, that pic of those two chinchillas in the glass is great!
Top

As for me, I'd like to see mouse washing his face and whiskers, as rodents (mice, rats, rabbits) do, using their paws as hands. It is so cute!

The rats, because they seem like really, really nasty but capable characters, I'd like to see them slouch, pop their knuckles, sleep sneakily under their helmet while on sentry duty, smoke, cough and belch, cackle madly when talking with each other about awful things, sharpen their blades, make some air swings with their weapon if alerted, scratch their butt with an axe,

As for the frogs, this faction seems to despise all the hairy ones (mice and rats) equally. They are about the same size as the mouse, and I guess they have a slightly lower tech level than the rats. I'm not sure whether they can ever be friends with our hero, it may be possible. It would be fun to see them take a break from standing, and revert to the normal frog position every now and again. Perhaps even roll out the tongue to catch a fly, or lick their own eyeball, or plink the webbing between their fingers like a guitar string when they are bored.

You know.. in the book I was writing, in an alternate world paralell to earth where the lizards/amphibean creatures took dominent roles are the rulers, I had the frogs as more of assassins. Most times when I see frog like characters in games they end up being more akin to what you (David) have described. Lower in the ranks, not as smart, not as capable (technology wise). In what I imagined they were great assassins due to the fact many frogs are naturally poisonous to touch (so trying to wrestle or grab one would be potentially lethal) and they're VERY limber and agile, so leaping/dodging and moving like a ninja would come naturally. They do have a thick core, which is their only real weak point, but with constant fast movement it would make them a hell of an adversary and using their thin fast limbs plus their tongue to fight could make them formidable. Plus their eyes can move independently, allowing for ninja like awareness all around them (or nearly so). And being amphibian, they can stay underwater hiding for long periods and pop out to attack.

I doubt this would align at all with what Seith had in mind (the early renders had them looking like typical low armor thugs/sentries) but it'd be a smash to see that put to practise. Also if you like that art, the artist is on deviant art and has a bunch of other stuff, really worth checking out!!

Yes, it would be great to have ninja enemies, especially frogs! I've always loved frogs... anyway, did you ever finish that book?
Top

Raggon wrote:Yes, it would be great to have ninja enemies, especially frogs! I've always loved frogs... anyway, did you ever finish that book?

Sadly no Life got a little crazy and so I had to set it aside for a while. I do need to go back to it, but I also need to brush up and maybe do some short stories beforehand so I don't write a ton of stuff for it that needs complete revision. It is a pretty complex story that bounces between 3 plots and 2 worlds. and a multitude of characters.

But yes I like the idea of having a stealthy, ninja like class of enemies that can sneak up and surprise the player sometimes. Maybe not have them in every possible situation, but certainly in spots it could be right fun. Like if the frogs mostly relied on blow guns (they should have pretty powerful abilities with blowdarts considering the air bladder they got) so you'd hear a frog croak and see a projectile coming from the shadows.. hehe... You'd have a little notice to dodge, but not too too much.

Also make players watch the ponds and pools of water for movement or ripples in case of more enemies.. hehehe...

In terms of movement, (this thread) I think having these different animal types, and combat classes, you'll get a nice variety of movement styles. From the lumbering ferocity of the skeletal rats to the quick fluid motions of the hero mouse to the fast stealthy frogs., to the zerg rushes of a cluster of crabs coming up from the sand. Add a few larger enemies for slower more deliberate movement, and maybe an animal with more a defensive posture and it'd be really interesting to navigate. 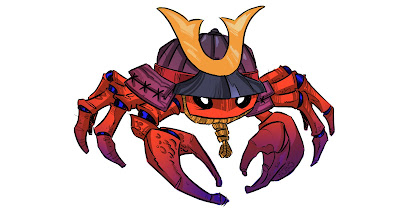 Nuttin like crab samurai hiding in the sand or in the grassy thrush by the beach waiting to pop out and rush the player.. hehehe.

I do like David's suggestions for Emotes by the rats.. hehe. If those kinds of animations were used, at least in part, across enemies it'd be really amazing. The creatures would come to life and feel more like an animal and less like a digital puppet.

@EvilKing... ninja frogs, that's genius! Seriously, with your imagination, you should consider writing (and finishing) a book

In terms of gameplay, for sure Seith is looking at a balance of behaviors between the species. Your idea of a stealthy enemy sounds really smart, and I'm loving the idea of froggy agility, sticking to vertical surfaces, sound cue, blowdart and ripples. As you know, the mouse will also be quite stealthy... it would be a blast to be stalked by another 'stealth ninja' style character in certain sections of the game. Kind of like in 'Predator' (the original movie).

But I suspect that the crabs will be BIG and formidable, almost rat size. So a zerg rush of big crabs would be terrifying!

But if the mouse is agile, this would be great for a 'race-car style' speed section... outrun the crab horde