One paper frog = One digital frog!!

Talk about anything related to Ghost of a Tale here.
Post Reply
40 posts

***UPDATE: The competition is now closed! Our winners' names are listed below. Thank you so much to all of you who took the time to build Kerold and post pictures, it's really wonderful to think that there's now a frog army assembled around the world! If you haven't received an email from us about your prize let me know, and I'll be in touch. And as Kerold would say, "Bah".***

Hi there, as detailed in this update we're launching a new papercraft contest (similar to the one we did with Tilo) where you'll be able to win a free code for the upcoming console release of Ghost of a Tale! 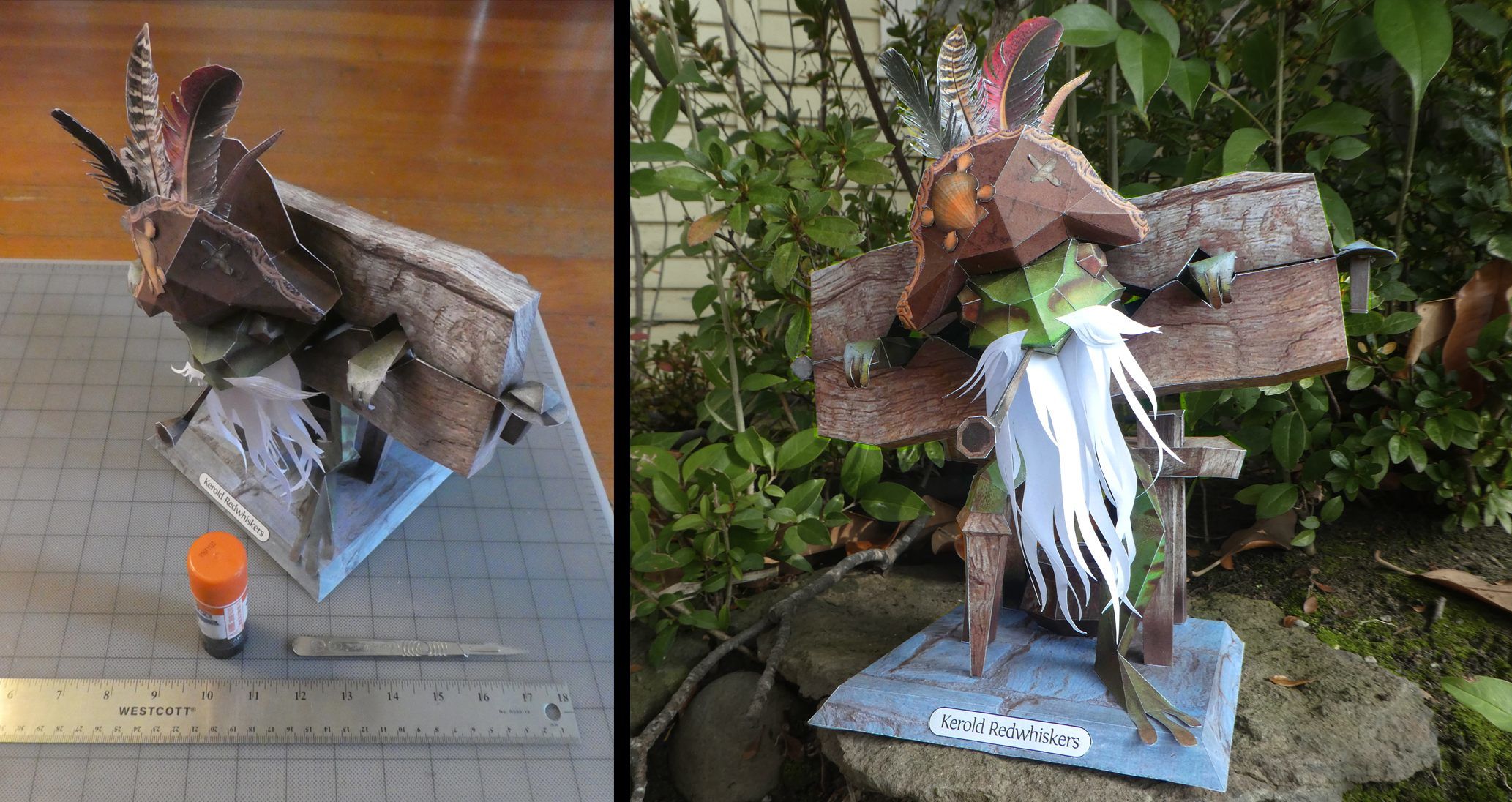 And don't forget to have fun!

The figurine of Kerold is at the same scale as the one of Tilo, and so at least twice as tall. There's a pattern for Kerold's beard in the file; feel free to decorate it however you like, or even make your own out of cotton wool or whatever.

Here is one crappy old black-and-white kerold from france !

It is my first papercraft and it took me three days since I made it out of thin paper (which was a very bad idea).

I'm a broke student and I had neither heavy paper nor color printer but hey, I still wanted to participate

Hope it will still do for the contest, I love the game, been following you since early development and have only recently been able to test it at a friend's but I won't be able to buy it before a long time !


I tried to put him outside but it is not very sturdy and there was way too much wind, so I put some pictures behind

Wow, that was fast! Thanks so much, he's fantastic! I love that he's black and white. Our first Kerold!
Top

It's a little cold and dark outdoors here at the moment, so rather than show a very chilly looking Kerrold in the snow, we'll instead feature this very improvised indoor backdrop!

Thanks for creating this paper model to build! We had a wild few evenings connecting all the pieces together, and it will go great next to our Tilo!
Top

This looks so great! I love the background, and it's lovely to see Tilo and Kerold together. How was the build? Do you find it easier, or more difficult than Tilo?

FREE?! Why would i want to be free? Being free is what got me put in here in the first place! Well... That and the piracy things.

There is my entry! Love the other papers, i wish to post another photo with this and my pet if i can

I dont have any beautiful place to take the pictures

Another great Kerold! It looks really good on glossy paper, he has a realistic shiny skin!

Hellow people ! (i'm frensh so sorry for my english)

It was my brother who told me about Ghost of a Tale he loved and this contest, he knows my love for Diy and atypical games so he was right.
For my first model it was a bit difficult but I loved it.

After doing some research I decided to participate, already just to have the sculpture, the chara-design is so fun! and then because this contest is rather original and interesting I tell myself that the game must be even more
So after 3 nights and 2 full days of work I present you my participation!

Wow, really great job! Thanks for persevering, and making this wonderful kerold!